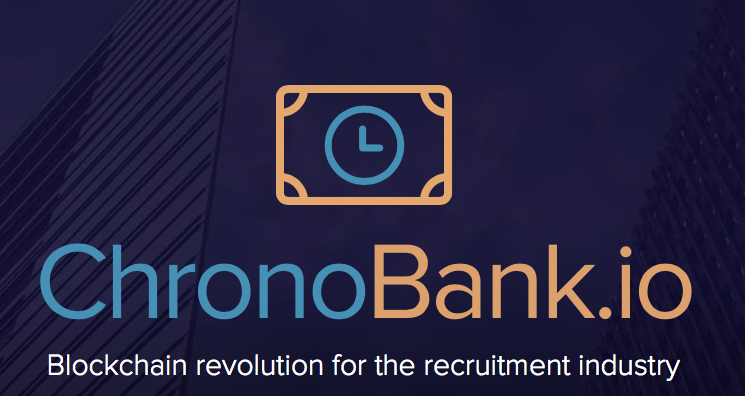 The recruitment industry is still based on the traditional model of using intermediaries to hire workers. In exchange for helping businesses locate the right people to fill vacant positions, agencies charge expensive fees. While this is generally accepted as the standard practice for long term appointments, it is quite costly for freelancing or contract work. Organizations often end up spending time and capital on securing employees instead of focusing on their business goals. Now, there is a startup looking to change that. That startup is Chronobank.

Chronobank is a blockchain startup that is aiming to change recruitment services, especially in regards to e-commerce, construction, industrial and warehousing sectors. It will do that by partnering with large and reputable companies HR agencies to ensure the supply of labour hours.

The company is currently developing two important platforms that could disrupt the recruitment sector and improve on the current model. They include:

The LH tokens will be “hyper-liquid” and can be easily accessed on an LH debit card. LH tokens will also allow people to transact while maintaining AUD/GBP/EUR/USD measured values.

Chronobank also plans to launch an online job marketplace that anyone in the world will have access to. This marketplace will be called LaborX. The LaborX platform will enable employees and businesses to connect to a peer-to-peer basis. Using this platform, companies will be able to buy labour directly, without having to rely on labour agencies or any other intermediaries. The exchange will be supplemented with a reputation system similar to the one used by UpWork, enabling workers to be compensated in line with their experience and talents, and not dictated by industry payment rates.

How LaborX can benefit Africans

For freelancers and digital entrepreneurs in Africa, Chronobank’s LaborX platform could be of great benefit. Firstly, it will provide Africans with new job opportunities by matching international companies with freelancers and remote workers from around the world. Secondly, the earned Labour Hour tokens could become an attractive store of value compared to the prevailing volatility of local currencies across the continent. By providing tokens backed by labour hours, Chronobank is promoting the use of a more stable currency. And thirdly, due to LaborX’s reputational system, the per hour rate that workers can charge will increase as users complete more work and better their reputational rating, which means Africans will not be bound by generic market rates for freelancers and remote workers from developing countries.

As remote working and freelancing is growing fast in Africa, a platform like LaborX will be a very welcome addition to the job marketplace and a new opportunity for tech-savvy Africans to make a living.

For users who are not well versed in cryptocurrency terminology, an ICO (initial coin offering) refers to a new way of funding for blockchain companies by issuing a new cryptocurrency or digital token to early backers for the project. ICOs are an excellent way for new companies in the digital currency space to raise money for funding their business operations and a way for investors to benefit from the success of a new blockchain startup.

The Chronobank ICO launched in December last year and has already attracted over 1,500 investors raising over 1200 BTC up to date. Significant quantities have also been raised on Ethereum, Litecoin, WAVES, and NEM.

The crowdsale is still ongoing until February 14 and, so far, the initial targets are being revised as interest for the ICO continues to grow. Throughout the crowdsale period,  1 BTC will buy 100 TIME. Chronobank has set a target for 20,000 BTC, hence valuing the total TIME tokens at around $16 million. TIME tokens being sold in the ICO will guarantee its holder an ‘issuance fee’ for LH tokens issued on the blockchain. The issuance fee schedule will be 3% in 2017, 2% in 2018 and 1% in 2019.

An investment in Chronobank and its distributed protocol is an investment in the future of labour hiring free from middlemen and other bottlenecks. The company founders are well connected in the recruitment services industry, which gives them valuable insight on how to take their concept to the next level.

Check out the Chronobank ICO today if you want to be a part of the reshaping of the recruitment sector.

How the Blockchain Can Make the Cloud More Secure