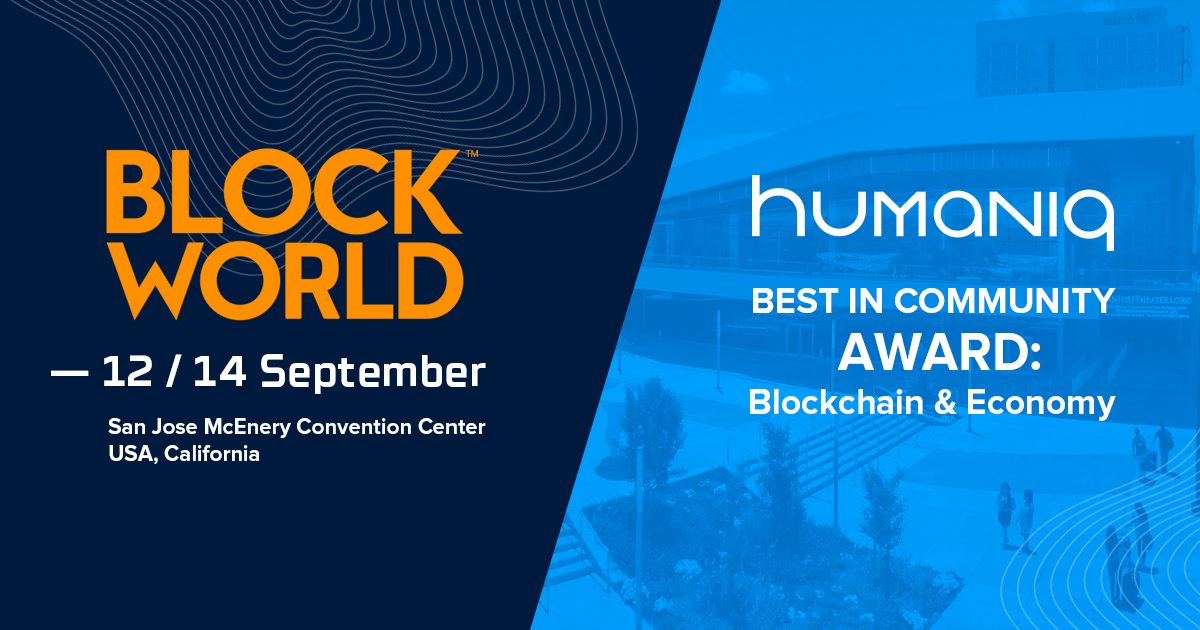 London, September 14, 2018 – London-based FinTech company Humaniq has won in the largest Blockchain and Crypto awards based on an online public vote. The Blockchain-for-Good startup won the 2018 BlockAwards in the category of Community Award: Blockchain & Economy and the Humaniq team has been presented with the award at BlockWorld 2018 on September 13-14 at the San Jose Convention Center, San Francisco, CA.

The 2018 BlockAwards celebrate technical innovation, adoption and reception in the Blockchain Industry and by the developer community and the BlockAwards Ceremony took place at BlockWorld 2018, the world’s largest crowd-powered Blockchain Developer conference & expo. The global Blockchain economy gathering includes over 3,000 attendees and 200 speakers. Blockchain professionals, developers, entrepreneurs, and investors will converge in Silicon Valley for one of the largest Blockchain and cryptocurrency conferences to push the industry forward, foster innovation and forge long-lasting relationships and deals.

A shortlist of entrants for the award was selected from over 250 applicants, with the nominees for the 2018 BlockAwards chosen against three main criteria: attracting attention and awareness; generally well-regarded by the developer & engineering community, and recognised as a leader in its sector for innovation. The jury’s acceptance of the Humaniq project and the rapid growth of the Humaniq community demonstrates yet again the project’s strong social message, groundbreaking technological solutions and unique approach to token emission. To win a contest facing such intense competition is an acknowledgment not only of the important role of the project and its undeniable contribution to the Blockchain and crypto community but also of the significance of Humaniq’s mission which is delivering financial tools of the unbanked population in Africa, using biometric technology as an anti-sybil measure. FinTech startups using the most advanced technologies have considerable power that can help developing nations to gain access to the global economy and this huge recognition makes Humaniq more determined than ever to prove it.

Humaniq keeps achieving critical project milestones, such as surpassing the 450,000 users mark and opening services in 22 African countries. Its ever‑growing user base is a blue ocean for potentially thousands of new projects: 1 billion new users in the coming years, $4 trillion potentially in user accounts and more than 200 start-ups are planning to move onto the Humaniq platform. The platform continues to expand in Africa further, and is planning, in addition, to launch operations in Latin America.

“The BlockAwards spotlight the technologies that enable decentralisation, and we believe Humaniq is a leader in their industry for enabling the next generation of decentralisation. Blockchain is about more than just tokens, it’s about enabling new solutions that change how industries work. We’re excited that Humaniq can be a part of the technological shift!”, stated Geoff Domoracki, Founder of DevNetwork, producer of BlockWorld & the 2018 BlockAwards.

Humaniq was given the award at the 2018 BlockAwards Ceremony on Thursday, September 13, 2018.